The Undefeated by Kwame Alexander with illustrations by Kadir Nelson, is a powerful reading experience that highlights for children the history of African-Americans and the promise of our hope for the future.

This outstanding picture book won the 2020 Caldecott Medal, awarded annually to the artist of the most distinguished picture book published for children in the United States. It was also given a Newbery Honor Medal for its distinguished contribution to American literature for children and the Coretta Scott King Award, given to an African-American author and illustrator for outstanding inspirational and educational contributions. On all three levels, the illustrations, the text and the message, the book is an inspiring read that belongs in classrooms, homes and libraries homes across America.

A successful picture book for children balances words and illustrations, which work together to tell a story. The text is Kwame Alexander’s free-verse poem, spare and minimal, which was written in 2008 to celebrate the birth of his second daughter and the election of Barak Obama as president. He strove to highlight African-American history that had been forgotten and to embrace the “woes and wonders” of this American story.

The illustrations, photo-realistic oil paintings by Kadir Nelson, are the highlight of the book. He infuses the faces of people from history, both the famous and the nameless, with emotion and beauty. Their portraits speak to the viewer of the joy and suffering of the African-American people. The illustrations have a luminous, glowing quality that spread across the oversized pages, and illuminate the determination and grit of the subjects.

Alexander’s poem makes brilliant use of “un –words”: unforgettable, undeniable, unflappable, unafraid, unspeakable, unlimited, undiscovered, unbelievable, unbending, underdogs, uncertain, unspoken, and finally undefeated. The repetition of “un-words” builds to a climax, and Nelson’s final illustration of “undefeated” is a crowd of children of today, with bright smiles and sparkling eyes, inspired by the past and dreaming of the future.

Alexander and Nelson honor the achievements, courage and perseverance of prominent Black artists, athletes, and activists. The pictures are an assembly of famous Americans, from Jesse Owens to Ella Fitzgerald to Langston Hughes to Serena Williams. On one large spread, historical and contemporary musicians are pictured together, making past and present interrelated. Also highlighted are important moments in American history, which include the Civil War, highlighting Black soldiers who fought “to save an imperfect union” and the freedom marches of the Civil Rights Movement, with a diverse group of people singing “we shall not be moved.” Several pages are dedicated to ordinary people “who survived America by any means necessary,” followed by a haunting, blank, two page spread with the words “…and the ones who didn’t.” Joy and sadness intertwine together in this book, like the experiences of the people whose story is being told.

The book  addresses the horror of slavery, the violence of the civil rights movement and the police brutality of today. The most moving portion of the book involves three pages illustrating: “This is for the unspeakable.” The first of these three spreads, subtle and powerful, duplicates a drawing from the 1780s of the hold of a slave ship, and shows men’s bodies laying side-by-side, margin to margin, looking like patterned African cloth, until one looks closer. The second includes framed portraits of the four little girls murdered in the Birmingham Church bombing, with shattered glass covering their sweet faces. The last shows a spontaneous memorial to youth killed in recent police violence: teddy bears, burning candles, bouquets of flowers, and school pictures of the victims, superimposed over an American flag. The reality of these events cannot be denied and adds honesty and depth to the story, but ultimately does not detract from the overall positive message of the book.

One of the great assets of this book it that it can be accessed by children at different levels of understanding. It can be shared with children as young as preschoolers, as an introduction to both American and Black-American history. For older students it can serve as a springboard to understanding history through individuals or groups. The book’s back matter includes an annotated list of historical figures and events featured in the book. I can see the book being a treasured by parents and children, as well as being a powerful teaching tool for the elementary classroom.

Sometimes, I think the American Library Association, which awards the Caldecott Medal, does not always choose the best book. This year, however, they got it right. The Undefeated by Kwame Alexander and Kadir Nelson is an extraordinary book that richly deserves the praise and honors that it has been given. 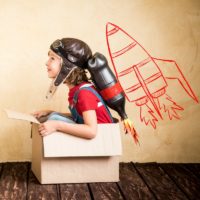